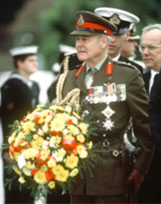 The Patron of the Australian Army Aviation Association is General Sir Phillip Bennett, AC, KBE, DSO, Retd. General Bennett had a long and distinguished career in the Australian Army which culminated in tenure as Chief of the Defence Force from 1984 to 1987. General Bennett had active service in Korea (two tours) and Vietnam where he commanded the 1st Battalion, The Royal Australian Regiment, and was awarded the Distinguished Service Order. He commanded the 1st Division in the late seventies and was Chief of the General Staff (the former title for Chief of Army) before becoming CDF. He was a strong supporter of Army aviation throughout his career, and undertook a rotary wing pilot’s course at Oakey during his appointment as the Commander of the 1st Division.